Warning
Our new website is optimized for the most current web browsing technology. If you are using an older web browser, part of our website may not function properly as designed. Please consider upgrading your browser for an error free experience.

When Did You Get Old? 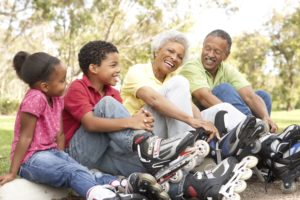 31 Ways To Look And Act Younger

Would you like to seem a little younger? Does time seem like it is passing you by? Well it’s never too late to change. The brain and body are capable of significant change right up to death. The problem is our mindset and self-belief switch off way before then. The old adage that we are only as old as well feel is very true. We feel old because we stop doing, stop laughing, stop being mischievous and spontaneous and then it becomes all too hard and the excuses start to flow. It’s much better than arguing with our self-talk or admitting that we aren’t actually trying to improve or even maintain our vitality.

If you would like to reclaim some of your fitness and figure from your youth, this is one article from TFW Founder Martin Rooney you cannot afford to skip. Read this and not only will you get a little laugh, but you will also get a big idea how to improve your health.

Whenever I present, I am always honoured to take photos at the end of the show. If you have seen photos of me or from coaches at TFW’s, you have probably noticed our signature “warrior face” pose.

This is a growling face with my hands up like a fighter (often with a warrior yell thrown in for effect too!) I don’t do the face to be angry, I do it to have fun.

Although striking a pose and making some noise is more entertaining than just standing still, many people have to be prodded into doing it. Once they hit the pose, however, you can see they get a quick taste of how fun it is to act like a kid again.

That got me wondering if there are any other negatives you experience by “growing up.”

When I am traveling, I can often be found pulling off what might be considered some “childish” acts. Whether it is performing 20 jumps to get a great photo in front of a famous monument, riskily climbing up on a statue, or taking on a food challenge with some local delicacy, I notice most people my age choose to stand and watch.

You know the drill: they watch and seem to enjoy it, but aren’t involved. Kind of like those parents that sit out of the “splash zone” at Sea World as if there is an unwritten rule that older people no longer enjoy getting wet.

Don’t get me wrong. Having 4 young daughters (and a few more grey hairs!) is a daily reminder there are ways I too have “gotten old.”

For as much running around as I do, I have also found myself standing on side of a playground scrolling through emails, waiting while my kids take a fifth consecutive trip on a roller coaster and puzzling over why their math homework got too difficult.

This had me wondering once again, what should stay and what should get removed from your life when you go from being a “kid” to a “grown up.”

Since there is no manual here are my ideas on how to grow up while still staying young.

Good Ways To Grow Up

When you enter adulthood, there are some things you did as a kid that are probably wise to stop.

Whether it was eating 3 Big Macs (yes I did it!) or not cleaning my bathroom towel or bedroom sheets for months (yes I did those too!) when you “grow up” there is a point some things should go away.
Here is a quick list of other things you may have done when you were younger that you should have stopped doing by now:

Even though that list may put a smile on your face as you remember some of the “good old days,” the good news is you hopefully removed most of these items from your life as you got older.

There are some things you probably did in your youth that should not have been removed and some that still need to go.

Let’s start with the stuff you once did that should have stayed:

You may have packed your toys and trophies away, but there are some youthful ways to keep your inner kid alive.

Yes, getting rid of your torn tee shirts or heart throb posters was a good idea, but there are some other “childish” habits that weren’t. If you haven’t done any of these in a while, time to get going before it gets too late:

Do you think people should get overweight or weaker as they get older? I don’t!

Just because you grew up doesn’t mean you have to look and act old. People don’tlose strength because they got old, they got weak because they stopped using strength!

Just like your car might have once been filled with garbage and smelled like a locker room, there are some things you did as a kid that don’t work anymore.

Here is a list of things you may have gotten away with that need to go:

When you were a kid, the only vegetable you may have known was a couch potato, but you need to be smarter than that.

When you were young you might have had a smaller expectation for your health.

Just because you got away with candy, soda and fast food doesn’t mean it’s still the right thing to do.

Ironically, paying more attention to your health will be the way to keep the kid alive inside of you.

Just because you are not a kid anymore doesn’t mean you always have to act like it!

**If you would like to see how we can help you stay young or revive your youth and vitality take a look at our upcoming 8 Week Warrior Challenge which kicks off on the 2nd of October 2017 at TFW Coffs Coast.